The game uncharacteristically wrests control aways from the player as the super metroid chows down on the sidehopper, and as soon as it’s completed its snack you regain power over Samus again. There’s just a split-second before it swoops down and latches onto Samus and begins depleting her health many times faster than any other source of power drain in the game. In mere seconds, Samus’ health goes from maxed out to zero.

Well… not quite zero. At the very last moment, a split-second before Samus takes her place among the desiccated carcasses of Zebes’ indigenous life forms, the super metroid has a change of heart. It pauses and releases Samus, hovering uncertainly over her as she pants, on one knee, in mortal exhaustion. And it begins keening, making the exact same noises that the baby metroid made at the beginning of the game – and, of course, that it makes on the title screen every time you load the game, lest you’d forgotten that crucial audio cue in the hours between the prologue and these final moments of the game.

Again, without a single written word, Super Metroid makes its storyline clear: The space pirates abducted the baby metroid so they could use it as the key to their metroid army, cloning it with beta rays and evidently mutating it in the process. The original metroid resides here in a special pen in Tourian, close to the heart of the space pirate’s operation, bloated into some kind of monstrosity with a voracious appetite, but still in possession enough of whatever instinct or sentience it might have had to recognize Samus as its “mom.” One can only assume her new lavender Gravity Suit caused the confusion in the first place.

Unwilling to kill its adoptive mother, the super metroid flies off, surprisingly expressive for a hulking space monster whose entire demonstrative range consists of tensing its mandibles and chittering. Must be something in the way it hovers.

There’s an energy recharge station shortly after this encounter that will helpfully take Samus back from 1 HP to however many thousand she has built up. Does the super metroid treat the energy station like a water fountain, do you think? One of those eyeball doors guards the inner sanctum ahead, unscathed by the massive parasite it shares board with. I guess even ravenous metroids have standards.

And finally, a familiar sight (even if you didn’t play the original Metroid, thanks to the prologue of this game): The Mother Brain’s lair in the central core of Tourian. The layout and hazards will be instantly familiar to veterans and immediately clear to novices. Rinkas materialize and home in on Samus; rotating gun turrets provide defensive fire, and acid lines the floor. As before, your task is to destroy the regenerating Zebetite columns that form the Mother Brain’s perimeter, advancing on the boss herself, one flesh tube at a time.

You will find a few small differences, as befits the march of technology: Some of the Zebetites are half-height and require a little more finesse to destroy, and you need to roll up and hop through the opening in order to advance. Otherwise, though, the drill is much the same, and thanks to Samus’ expanded arsenal – hello, Super Missiles – this process turns out to be much less harrowing than in Metroid.

That holds doubly true for the Mother Brain battle. This face-off proves to be vastly easier than it was the first time around. Not only does the glass surrounding her give way to a much larger opening, her engineers even thoughtfully constructed a small platform at a perfect height to give Samus safe purchase from which she can aim up and pepper the Mother Brain unit with super missiles.

Until, of course, Mother Brain’s case disintegrates, leaving only the brain itself intact… which attaches to a cybernetic horrorshow hidden below. Mother Brain’s battle suit rises from the floor, and the real battle commences.

While not the most difficult battle in the game – Super Mother Brain attacks somewhat more slowly than Ridley, has no special retaliatory attacks against your heavy weapons, and doesn’t crowd Samus the way Draygon and Ridley did – neither can you simply sit and shoot indiscriminately as you fight her. She fires streams of blue energy rings at Samus’ current location while flinging forward explosive grenade-like devices that detonate upon contact with a surface and send out a runner of fire bursts away in both directions from the point of impact, similar to the Holy Water in the latter-day Castlevania games. Her brain core bobs up and down on its neck stem, constantly altering the angle from which it attacks.

The design of Mother Brain’s battle body goes straight for grotesque; it’s a freakish hybrid of Godzilla and a chicken, a fleshy and distended abdomen onto which biomechanical limbs and implants have been bolted. Besides the skeletal human-like hands, Mother Brain’s arms and legs look remarkably similar in design to those of the space pirates, which gives rise to an interesting question: Which came first, the hulking Godzilla-chicken or the egg?

Mother Brain changes color as you pepper her with attacks, growing redder and redder as she takes damage. Eventually, she gives up on her standard attacks, and a fantastic piece of interactive narrative begins.

Nearing critical damage, Mother Brain eventually decides enough is enough and unleashes a devastating ultimate attack against Samus. There’s no real way to avoid this energy beam; it sweeps around the room, and once it makes contact with Samus it pins her to the wall and begins sapping her energy at about the same rate as the super metroid did. Once Samus takes one of these beams, she becomes immobilized, kneeling heavily on the floor as she did in the wake of the super metroid’s attack. (One might theorize that the similarities are intended to suggest that Mother Brain has been outfitted with weaponized properties of the metroid, and, hey, why not?) While one hit probably isn’t enough to deplete Samus’ health entirely – unless you’ve been playing super sloppy, son – she’ll keep hitting you with the beam until you’ve reached critical health.

There’s an even greater sensation of helplessness in this battle than against the super metroid. The earlier deadly encounter transpires so quickly that you barely have time to process your panic; here, the Mother Brain takes her time, searing Samus repeatedly and charging up between attacks. To make it worse, the game doesn’t take away your control over Samus here. You can still struggle to make her move and fight back – but that’s all you can do. Struggle. Samus is too weakened to fight back, so all you’re really doing is flailing against the inevitable. Being left in control of a weakened Samus gives you the sensation that you should be able to do something here, but you can’t. As you cast about desperately for a tactic, Mother Brain systematically dismantles you.

Once Samus drops down to critical health, Mother Brain rears back for a final blow, and leans in for the strike –

– only to be arrested in mid-attack by the baby metroid, which swoops in to protect its mother by turning Mother Brain’s life-draining powers against her. The enemy leader flails about helplessly, just as Samus was doing only moments before, but to no avail. There’s no stopping the super metroid. 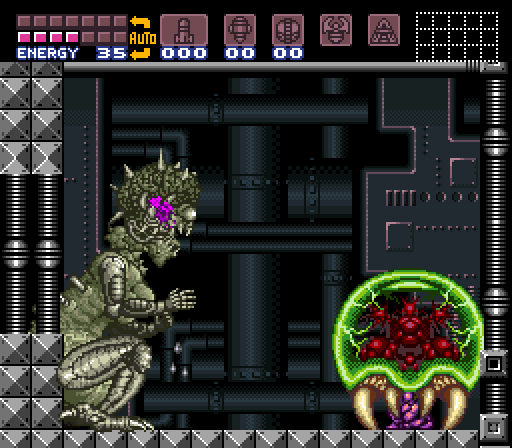 With Mother Brain reduced to dust, the super metroid turns its attentions to Samus, but not to drain her dry. Instead, it restores her health – a trick alluded to in the intro of the game, where Samus mentioned the potential energy-creating properties of metroids. Here we see Chekhov’s battery in action, and our heroine is brought back from the brink of death.

Unfortunately, so is Mother Brain; evidently she learned about villainy from the Die Hard school of evil, and not even the Super Metroid’s assault can stop her. Samus’ little “ho ho ho, now I have a machine gun” note really ticked her off.

As the metroid restores Samus’ health – a much slower process than the reverse, it turns out – Mother Brain recovers and takes aim at her disobedient bioweapon. As the metroid happens to be passing along its life essence to Samus at the moment, it’s quite vulnerable to this onslaught. You can only watch in horror as it slowly weakens under Mother Brain’s attack.

Once again, you’re rendered helpless here as events beyond your power take place around you. Though in this case Samus is perfectly safe from harm thanks to the sheltering aegis of the super metroid, you can only watch in dismay as your “baby” withers in order to defend you.

Samus’ health finally topped off, the metroid rises to retaliate against Mother Brain, but it’s too late; one final assault causes the friendly parasite to disintegrate, showering Samus with her life energy. At this point, the game is basically over.

In defiance of science and logic, but very much proper according to the appeal of your emotional sense of justice, the super metroid’s final gift to Samus is a supercharged new weapon variant called the Hyper Beam. Its coloration is, perhaps not coincidentally, remarkably similar to Mother Brain’s eye beam, but instead of taking the form of a fanned-out energy spread it instead condenses all the metroid energy into a focused beam, glowing white hot at the center.

With full health and a weapon seemingly capable of singeing the hair of God’s beard, you have to really make an effort to lose this fight. Mother Brain is simply outclassed in every respect. She reverts to her standard weapons – one assumes the capacity to fire her ultimate weapon was lost to the metroid and, if visual cues are to be believed, transferred to Samus – while Samus tears through her. It’s a cakewalk of a battle, but coming after the shock of Samus’ near-death experience and the murder of the baby metroid, that toothlessness is 100% pure catharsis.

While Super Metroid offers a master class example of open-ended game design, the highly focused portions that bookend the adventure do an equally amazing job of telling a story through the most minimal means possible. That isn’t to say every game should try to take this approach; Super Metroid works in large part because it’s constructed on the foundation established by the two games that came before it. And, let’s fact it, the story it tells is incredibly simple. But it’s an excellent demonstration of working within your means and using story to complement gameplay rather than overpower it, and proving that the interactive nature of video games means less can be more when telling a tale.

Eventually – and in fact much sooner than later – Mother Brain succumbs to Samus’ ferocious retaliation and crumbles to dust, making for one of the most satisfying video game enemy deaths since Final Fantasy‘s Chaos.

10 thoughts on “The Anatomy of Super Metroid | 17 | Family reunion”