If we assume that most newcomers to Mega Man 2 will attempt to play through the eight stages in the order in which they’re displayed (not realizing you can pick and choose your sequence at will), that means the game kicks off with Bubble Man. We also have to assume Capcom’s dev team had observed player behavior from the original when it arranged the new Robot Master select screen. Which raises the question: Why make Bubble Man the “default” stage? 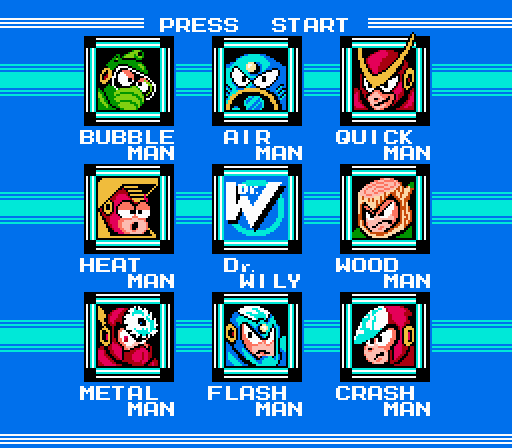 Bubble Man’s stage incorporates a lot of advanced game mechanics, features that never appeared in the original Mega Man. One one hand, you can understand the creators’ eagerness to show off all the new stuff they invented for Mega Man 2. Pursuing Bubble Man gives you a pretty nice introduction for all that this sequel does new, if you’re a veteran player.

On the other hand, for a total novice, it’s not really the best representation of the core Mega Man mechanics. It’s like learning to drive in a particularly unfriendly downtown area of a large city, forcing you to deal with unique traffic rules and uncommon situations when you should be getting a feel for the nuts and bolts of things. Your first time with a Mega Man game involves a lot of getting a handle on the jumpy-shooty action, so all the extra features in Bubble Man’s stage would make it pretty intimidating for a novice. 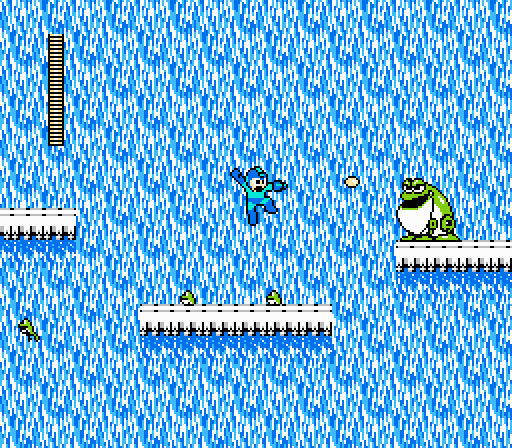 Right away, Mega Man begins not with a stretch of flat ground but rather with staggered platforms in front of a waterfall. While this is not the only stage to open without a decently sized stretch of flat ground, the uneven footing combined with the constant motion of the background waterfall can feel rather intimidating.

It doesn’t get any easier once you encounter your first enemies. These large frogs take multiple hits of Mega Man’s standard blaster (once again denoted in the menu with a P), all while discharging a spread of three tiny frog robots. The tiny frogs are particularly tricky, hopping in a large arc toward Mega Man every few seconds. These jumps are the only times they’re vulnerable, as otherwise they’re so tiny they actually lurk beneath Mega Man’s line of fire. While there was one enemy too short for Mega Man to hit with his basic blaster in the first game, they appeared in smaller numbers and moved more predictably. Well, not that the tiny frogs are particularly unpredictable, per se, but because you have to deal with several at a time, they can seem somewhat overwhelming.

You can’t even clear them out to make matters easier — once you’ve destroyed all three tiny frogs (or they’ve jumped off the ledges to their doom), the big frog spits another batch of them immediately. In other words, you’re forced to dispatch the big frogs while avoiding the small ones. Thankfully, the tiny spawn do very little damage on contact, but their abundance, movements, evasiveness, and regenerative traits make for a pretty complex beginning to the stage.

Beyond the large frogs, Mega Man has to traverse a series of platforms to drop quickly off-screen if he stands on them for more than a split-second. These aren’t like the mushroom lifts in Super Mario Bros.; once they come loose, they fall so fast there’s no way to gain purchase and jump at the last second to safety. You need to traverse the falling platforms without hesitation. At the right edge of the waterfall, Mega Man drops down into the water. This completely changes the physics of the game. A few screens into the action and already the game has rewritten the rules.

The enemies in this area are decidedly difficult to kill, too. They’re giant snails, whose shells fly off when struck. The exposed robo-mollusk, like the baby frog-bots, are too low to be shot with Mega Man’s standard weapon.

Unlike in the first game, where the only effect water had on the action was the forced forward motion of Wily Stage 3, here it gives Mega Man added buoyancy. Underwater, he can jump nearly the height of the entire screen, though if he breaks the water’s surface his upward momentum reverts to normal. While Mega Man doesn’t move any more slowly underwater, his added hang time gives the game a sort of “moon gravity” feel that can screw with your timing… …especially given the way most of the lower portion of Bubble Man’s stage is lined with deadly mines that destroy Mega Man on contact, similar to the spikes in the first game. The floatiness of your jumps while under the sea leaves you more likely to oversteer and drift into the spiked mines.

Oh, but that’s not what you noticed about this screenshot, right? The mines fade into the background here, because Bubble Man’s stage has a couple of visually arresting enemies to deal with: These giant angler fish, which (in keeping with what appears to be the stage’s theme of big enemies disgorging smaller foes) belch trios of shrimp, which rocket about in patterns similar to those of Bloopers in Super Mario Bros. This could well be one of the main reasons Bubble Man occupies that upper-left stage select slot: These things look cool. It’s the dev team showing off. There was nothing like this in the original Mega Man, and these aren’t even end-game bosses! They’re just minor mid-bosses.

And they do behave like bosses, interestingly. They’re only vulnerable in their lanterns. And, should you die in the second half of Bubble Man’s stage, any of the angler fish you’ve destroyed remain cleared away when you make your second pass. You’ll have to deal with a batch of the shrimp, which spawn from nowhere, but the fish themselves are one-time kills. 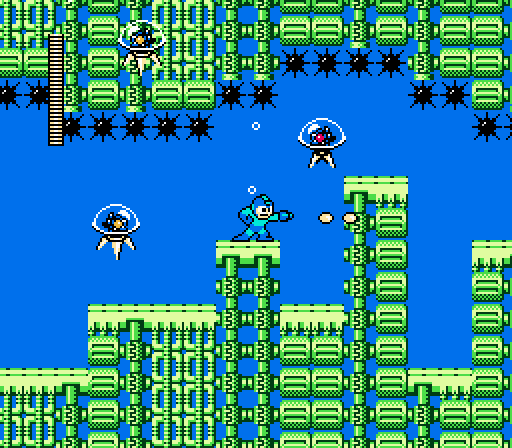 Beyond the angler fish you’ll find a series of staggered platforms beneath a spike-lined ceiling, which puts your fine control of underwater jumping and falling physics to the test. You need a steady hand to avoid plowing into the explosives above. Complicating matters, you’re constantly beset by these robotic jellyfish that descend from above and home in on Mega Man. They’re kind of like a hybrid of metroids and the “bubble boy” boss from Mega Man (a deliberate design choice, given how many backward references show up in Mega Man 2; its name even seems similar to that of the older boss). That connection also makes this a symbolically fitting open in level, tying the sequel into the final run of the previous game. 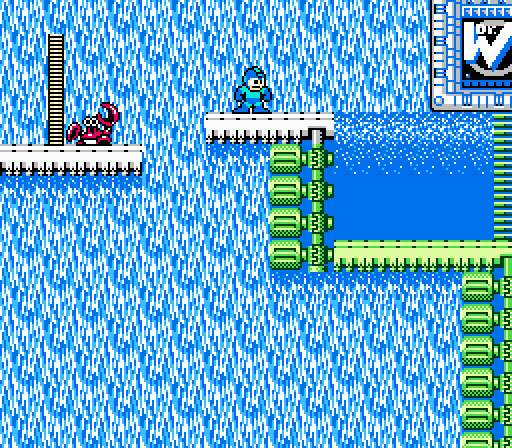 The final leg of the stage returns Mega Man to the staggered platforms in front of the waterfall, though this time around you face crabs rather than frogs. The crabs attack in a set pattern: One descends from ahead of you, then one from behind, repeat infinitely. The ones ahead can be tricky, potentially knocking you into a pit if you jump carelessly ahead. They’re easily dealt with once you sort out the pattern, but until then they make for an effective challenge on this uneven terrain. And finally, Bubble Man. You can see the new Robot Master design philosophy for this game at work here; Bubble Man behaves much less erratically than his predecessors, and his attacks are far less devastating. While he deals more damage to Mega Man per attack than vice versa, his movements are more restrained and he feels more pattern-driven — as a threat, he’s closer in difficulty to to Bomb Man than, say, Elec Man, and makes a challenging but not overwhelming first boss… provided you could make it through the stage.

Bubble Man largely sticks to the edges of the room, firing off a series of bubbles that bounce slowly toward Mega Man before rising toward the ceiling, then descending while firing a blaster similar to Mega Man’s default cannon. It’s not too difficult a task to evade his two different projectiles and return fire with several hits in between.

Bubble Man’s weakness is the Metal Blade, which hits him extra hard and excels at striking him while he’s lurking in the upper portions of the room. As in the previous game, the stage design is meant to clue you in to the boss’ weakness: The enemies that attack from above, or that slink so low they can slide right beneath the basic arm cannon, fall easily to the Metal Blade, which covers a wide angle and can be aimed upward. Unfortunately, the Metal Blade is so effective in every stage that this clue doesn’t particularly stand out. Oh well!