This is it: The big payoff for everything that’s come so far. The three diverging story paths converge once again, with everyone arriving in Narshe — some admittedly by a more circuitous route than others. All that Final Fantasy VI has presented to this point comes to a head here, and after the upcoming battle the nature of the game changes considerably. One of the nice things about FFVI is that it does its best, despite its limited memory constraints, to explore as many permutations of its expansive cast as possible. For instance, the reunion in Narshe sees plenty of interaction between characters known to one another, as you would expect… …but, at the same time, it also takes pains to show new combinations of histories and motivations. For example, Locke’s blithe introduction of Celes as a high-ranking officer of the entity responsible for the death of pretty much everyone in Cyan’s life doesn’t sit so well with him. Of course, Locke can’t possibly realize that for this old dude he’s never met, Celes is (not to get all Godwin here or anything) the Hermann Göring to his lone Holocaust survivor.

The game does as good a job as you could possibly expect of exploring the resentment and distrust the party has for Celes, and it doesn’t get dropped immediately like it would in, say, Final Fantasy IV, where interpersonal strife would occasionally get you turned into a magic pig, but that’s about it. It takes a while for Celes to integrate into the group… though the sequence ahead goes a long way toward smoothing things over with a thoughtful marriage of narrative and play mechanics.

Meanwhile, Terra is just trying to figure out if she and this other woman who can use natural magic are, like, sisters or something. In any case, in the time it took for Sabin and Cyan to unseat the foundations of every major religion in the world and teach a feral child how to transform into an electrical monster, Kefka managed to round up the biggest army the Super NES could possibly handle. That’s one more Magitek Armors than in the Empire’s previous assault on Narshe. Which leads to a reprise of the three-team battle from the very beginning of the game. By this point, that’s probably about five hours in the past, so… 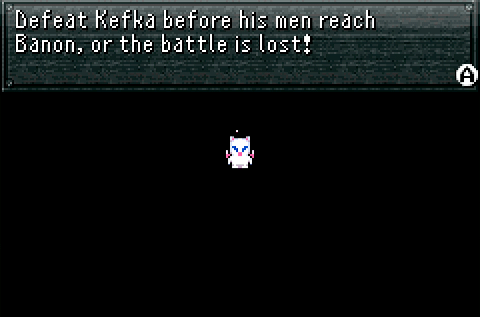 …a Moogle comes out to remind you what the rules are here. The choice of a Moogle avatar instead of a Kappa is surely no coincidence; it’s a subtle reminder of the last time you broke the team into three groups in the caverns and hills behind Narshe. But this time you’re not automatically handed three preset groups of Moogles and set about your work. Instead, you’re taken to this screen, where you must break your massive party into three teams. Until now, you’ve gotten about in groups of four or fewer characters, so there’s never been a need to ask what happens if your collective group exceeds the maximum size of an active party. Now you’re stuck with nearly twice as many characters as can fit into a single group, so you have to divide everyone into more manageable groups.

You’re allowed to regroup and save as much as you like before kicking off the fight, so it gives you some latitude for trial-and-error, should you need it. The seven current characters are definitely not created equal, and finding the right balance for this holding effort demands careful consideration. 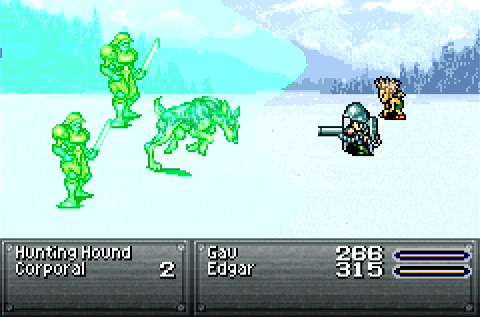 For example, a good half of the enemies you face here are human soldiers, so Edgar’s Bio Blaster is basically your “instant win” button for many of the encounters. Likewise, if you did even a small amount of training on the Veldt and experimentation with Gau’s Rages, you can face battles equipped with powers for pretty much every occasion. Of course, you can’t realistically take on every battle with Edgar and Gau, as the entire point of this sequence is that the enemy assault is multi-pronged, and everyone has to participate. Fortunately most encounters here (unless you get unlucky enough to face a Heavy Armor) are fairly easy. Other things to note: Around this point in the game, you’ll probably start to realize that Terra (and Celes) gain new magic skills as they level up. Unlike other magic you can acquire later in the game, these are predetermined and fixed according to character and level. Terra, for example, learns Poisona at level 6 and Drain at level 12; for now, this grants you access to powers no other character possesses. Which isn’t to say Terra can precisely steamroll the bad guys. For a living weapon whose powers the world desperately wants to take control of, she can’t flambé an army the way, say, Edgar can. Her one purely offensive spell, Fire, becomes much weaker against groups. She’s good for single-target attacks and healing, but that’s about it… and since magic is her main draw, she’s essentially useless against the boss of this sequence. Actually, this scenario features two bosses. The first is comparatively easy: The Hell’s Rider, whose most interesting trait is his ability to use something called Reverse Polarity. This power causes the party members’ rows to shift, forcing the rear guard to the front lines and the front-row fighters to the back. But since most characters in Final Fantasy VI tend to use special techniques that ignore row, this power is considerably less troublesome than it would have been in an older game like Final Fantasy IV. With Hell’s Rider defeated, you can reach the Imperial commander the sub-boss was protecting: Kefka. Kefka can be a bit of surprise here. Where your previous encounter with him painted him as a cowardly weakling who ran at the first scratch, here he has command of a huge range of devastating magic spells. Muddle, for instance, causes one party member to become confused — a more targeted version of Edgar’s Noiseblaster, and just as troublesome for the heroes as Edgar’s tool is to bad guys. More troublesomely, Kefka has access to the second tier of magic spells, such as Blizzara. Terra and Celes wield only tier-one elemental magic, meaning Kefka massively outstrips them in terms of power. Remember how hard Tunnel Armor’s first-level magic hit a single character? With the ability to wipe out any party member in a single shot, reduce an entire fully-healed party to critical status, and throw around status ailments that interfere with your ability to heal up and fight, Kefka by far represents the deadliest threat you’ve yet faced in Final Fantasy VI. But, fortunately, one neatly mooted by Celes’ Runic ability. Kefka doesn’t rely entirely on magic — he’ll occasionally hit a party member for moderate damage, but that’s nothing compared to his magical power. Tossing Celes into the mix to soak up his spells every turn completely defangs Kefka; the hardest boss to date becomes one of the easiest, with the right character in the party.

All told, this battle is your first real test of synthesis. The game has been throwing tutorial moments at you from the start, and here’s where you’re thrown in with actual choices to make, to see how well those lessons stuck. If you’ve been paying attention to the game’s workings and the distinctions between characters, Kefka should pose little challenge. Otherwise, he’s a brick wall that forces you to come up with an effective strategy. Brute force can work, but you kind of need to get lucky for that to happen. Much better to finesse it with the proper powers. As ever, a graceful loser. 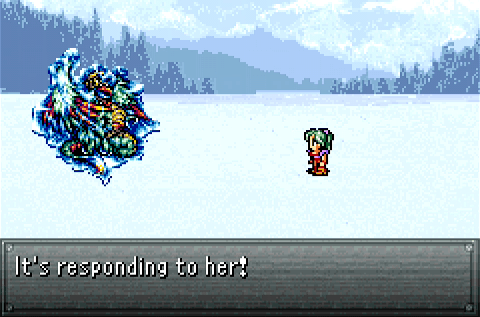 The game comes full circle as Terra is reunited with the frozen Esper to see what happens. “What happens” is that Terra suddenly transforms into a wild-maned pink creature. With a shriek, she blasts the entire party aside, going a long way toward explaining why everyone is so eager to press-gang her into their faction despite her paltry showing in the recent battle. And the first act of the game comes to a close, with the initial process of party-building and Terra-obsessing having led a group of six to Narshe, where the newly inducted Returners must venture into the larger world. From here the adventure becomes much less predetermined than it’s been to this point. While you still have a fairly linear tale to work through, you’re given more freedom to roam… …and freedom to build your own party. Only four characters can team up to form a party, so your first task upon striking out to find Terra is to figure out who gets to warm the bench for now. And, best of all, you can finally explore Narshe. The final piece of the puzzle falls into place at last.

This seems like a good point to take a break from The Anatomy of Final Fantasy VI; I estimate we’re at about a third of the way through the series, even if this is probably about an eighth of the way through the actual game. (Remember that this is a design survey rather than a Let’s Play, so much of the discussion was front-loaded.) 45 entries at 1500-2000 words a pop is a lot to write about a single game, and frankly I could use a break. So please look forward to… something else. Soon.

The Anatomy of Final Fantasy VI will resume at a later date.