Sabin’s chapter is surprisingly lengthy. Even after teaming up with Shadow, sneaking through an Imperial base, fighting through Doma Castle, and undermining the supernatural order of the human race’s afterlife, there’s still more to do. Shadow won’t take part in it, however; if you’ve managed to hang on to him to this point, here’s where he’ll part ways. Apparently a journey by train into the underworld was cool, but a leap from a waterfall is where he draws the line. And no wonder: This leg of the journey consists of Sabin and Cyan plummeting thousands of meters in freefall next to waterfall as freakish monster fish take a moment from laddering their way back up to their freakish monster spawning pools in order to attack. 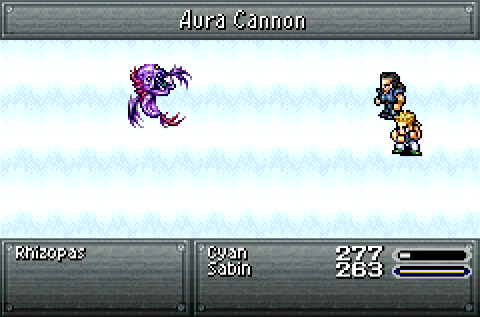 It’s all capped off with an obligatory boss battle, though this one feels a little perfunctory; it’s just a more difficult, more purple version of the other freakish monster fish. Once again, Sabin finds himself washed ashore, unconscious, where a new party members awaits. Other characters find allies through hard work and learning to share a common objective; Sabin drowns his way into them. 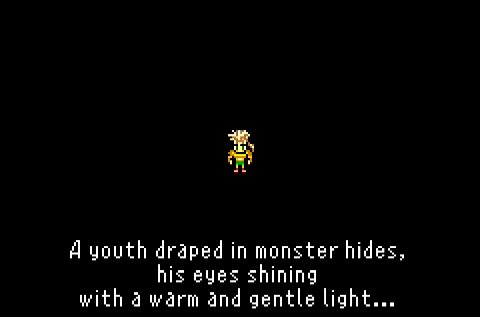 It’s Gau (or Wicket, if you prefer), and his special technique is as potentially valuable as Cyan’s is inevitably lame. But you have to earn Gau’s techniques, every step of the way.

Sabin and Cyan have washed up in an isolated region of the world called the Veldt. In the real world, you’ll find veldt in Africa, but in FFVI it seems more like a pastiche of Australia. Not only is it shut off from the rest of the world, it also contains all the most horrible creatures on the planet. The Veldt’s sole outpost of habitation comes in the form of a town named Mobliz, which has a bustling trade primarily in courier pigeons that connect the village to the larger world. Internet isn’t really a thing here, so news, rumor, and innuendo are all essentially the same for the inhabitants of Mobliz. The citizens’ musings about the outbreak of war abroad help convey the fact that the Empire, while far-reaching, hasn’t completely conquered the world yet. They also set into motion a small little side event — it’s too small to properly call a quest — that gives Cyan some additional character development far in the future. You can volunteer to help this wounded soldier write to his sweetheart Lola if you like. There’s no obvious benefit to it, but who wouldn’t want to act from a place of compassion? The most important thing about Mobliz is the fact that the Item Shop sells a new consumable good: Dried Meat. It heals a modest amount of hit points — more than Potions, which already are growing woefully underpowered by this point — but more importantly, it functions as food.

Interestingly, Gau appears in the purchase/equipment window despite not being in the party. By now the fact that you could name him should clue you into the fact that he’s a future party member, but seeing his sprite active and potentially benefiting from certain gear purchases you can make in Mobliz gives a stronger cue: He’ll be joining soon. Someone in Mobliz mentions the fact that there’s only one way to escape from this region, by water, and that the necessary equipment for doing so has long since vanished. For the moment, this means all Sabin and Cyan can do is wander around the Veldt, fighting a motley assortment of monsters. 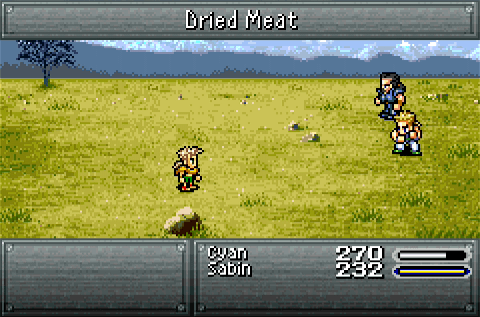 However, after a random number of battles (but generally just a couple), Gau will show up once all the monsters have been destroyed and complain about being hungry. If you attack him, he’ll get angry and vanish for a few battles, only to show up again. Of course, his rumbly tummy is your clue here: Gau wants food. Being a cool dude who’s beaten The Legend of Zelda, the solution should be obvious for you: Buy some Dried Meat and feed it to (i.e. use it on) Gau. He’ll join the party and add his not-inconsiderable talents to the mix. Much like Street Fighter‘s Blanka, Gau is a wild child who was abandoned as an infant and learned to live as the animals. In mechanical terms, this means he can use monster abilities. His Rage command is probably the most complex character skill in all of FFVI, but it’s incredibly versatile: Once you select Rage, you’re allowed to pick which Rage you want to use from a menu of abilities he’s learned. Like Mog, he’ll then enter a berserk state, using random abilities from the selected Rage until he’s slain or battle ends. In a given battle, he has two abilities to choose from for his current Rage, but where Mog can learn eight dances Gau can learn more than a hundred different Rages.

In practice, this makes Gau something of a hybrid of Final Fantasy VI classes: Berserker, Beast Master, and Blue Mage. The Rages Gau can access consist of skill sets tied to a specific monster — for instance… …if you learn to attack like Magitek Armor, Gau will randomly use skills specific to that enemy, such as Magitek Laser. But Gau sometimes gains special powers that those enemies don’t demonstrate; the Stray Cat Rage is always highly popular for the way it gives Gau access to some insanely deadly abilities early on. Actually learning the abilities, however, can be tricky and requires a fair amount of grinding. The unique property of the Veldt is that every non-boss enemy you encounter in the game can appear in random encounter formations. When on the Veldt, Gau gains the Leap command, allowing him to fling himself into a pack of foes. This ends the battle immediately, temporarily removing Gau from the party. After a few more random encounters, he’ll reappear at the end of the fight, automatically rejoining the team after a moment. Upon his return, however, he’ll have added Rages for all the monsters in the bookend encounters to his repertoire: The monsters he leapt into, and the monsters he resurfaced with. Those become permanent additions to his arsenal of Rages; by the end of the game, if you take the time to train on the Veldt every once in a while, Gau has by far the broadest skill set of any party member. Not all Rages are created equal, and there are plenty you’ll never want to touch. But some can be situationally invaluable, while others can carry you through to the end of the game.

This is all fairly complicated, so Kappa returns to explain Rages in detail. Even so, there are factors that Kappa doesn’t explain. For example, Gau’s Rages don’t just lend him new powers — they also buff or afflict him with that enemy’s special traits. For example, the Magitek Armor Rage gives Gau Protect status for as long as that Rage lasts, protecting him from physical damage… but it also gives him vulnerability to lightning. When you Rage a flying enemy’s skills, Gau gains float status and an invulnerability to Earth elemental attacks.

And status effects obey their usual rules, too. Protect only lasts until the end of the fight, but Float is a “permanent” status and will continue after the battle ends. This can be handy in certain situations. And in any case, it makes Gau a powerful (if sometimes unpredictable) ally; many enemy elemental skills don’t count as Magic and therefore can’t be nulled by Celes’ Runic ability, giving you a potential “magic” backdoor against various magic-slinging enemies. The strategic possibilities of Rage are enormous, but the game doesn’t give you much guidance on how to use them, leaving you to sort out the specifics of each Rage and the secret benefits of the technique for yourself. Story-wise, Gau is essential to the party’s progress because he alone knows where the sole diving helmet belonging to Mobliz has been hidden. Once the party ventures to Mt. Crescent to the south of the Veldt, Gau will dig up the helmet, allowing the party to travel the Serpent Trench between Mobliz and Nikeah (a seeming nod to Serpent Road in Final Fantasy IV) — though how three people get about undersea with only a single diving helmet between them is one of those little plot details that you’re probably better off not investigating too carefully. This plays out like an undersea version of the Lete River, with the party zooming along through an impressive-once-upon-a-time Mode 7 view of the ocean floor and occasionally picking a route, some of which loop back. Enemies in this area are, fittingly, aquatic in nature. They’re fairly easy to trounce, but you have to proceed with caution as the tiny jellyfish foes, Aspirans, have a counterattack called Gigavolt that can and will kill a party member in a single blow. Since you can’t access the party menu to heal up between battles in the Serpent Trench — the automatic forward motion negates that — this can be extremely dangerous, potentially putting you at a massive disadvantage when you enter a battle with a party member or two dead. You can avoid Gigavolt by taking care to use only basic attack commands, but by this point you’ve probably long since learned to use special techniques… This is a chance for Gau to shine, though his potential here is something you have to figure out on your own. If you choose a Rage that grants Gau lightning immunity (or even absorption), he can pummel any Aspirans you encounter with impunity and soak up their electrical counterattacks. This goes a long way toward keeping you alive until you automatically reach Nikeah. Speaking of which… You’ve got to be kidding me.

No new party member shows up this time, though, so that’s different, at least. Nikeah, too, is isolated from the rest of the world, not unlike Mobliz. Unlike, Mobliz, they have discovered the fun technology known as “boats,” and a ferry here will take you back to Figaro. But not before a woman who evidently thinks of her breasts as giant sentient eggs from a nursery rhyme comes on to Cyan, much to his indignation. And then, there’s nowhere to go but back to Narshe, along with the rest of the team, bringing this extremely lengthy portion of the game to its close.