Hi, everyone. First, an administrative message:

Like the rest of the Internet, I’ve launched a Patreon account for the purpose of funding this site, Game Boy World, and (gasp!) Metroidvania. If you enjoy what I’ve been doing with these side projects, please consider supporting my efforts so I can afford to keep things going. Anyone who begins supporting these sites by July 4 will receive the first supporter bonus, a PDF (or physical book, depending on the support level you choose) of The Anatomy of Mega Man Vol. 1, containing the Anatomy series for the first two Mega Man NES titles. Thank you for your support!

And now, on with the program.

Wood Man’s avatar appears off to the right of the center default position of Mega Man 2’s title screen, making it a not-particularly-inviting place to kick off the game. Yet several commenters have already noted that this is where they prefer to begin their Mega Man 2 odyssey, and for good reason: It’s perhaps the most nuts-and-bolts stage of the game, featuring no mechanical gimmicks to speak of. Just lots of running, jumping, climbing, and shooting, with a small sequence of mild platforming hazards to contend with toward the middle. The boss is unreasonably difficult in my opinion, thanks to his more or less unavoidable attack pattern, but everything else about Wood Man’s stage really does make for a good starting point in the game. 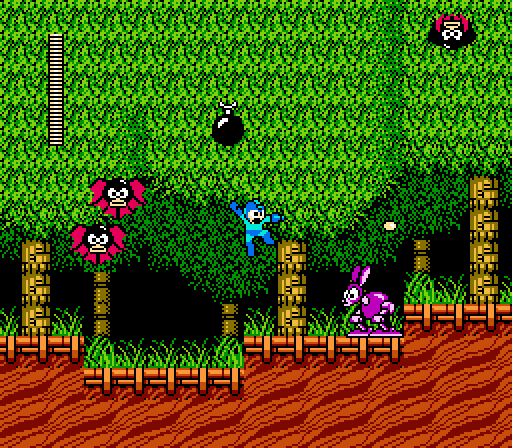 Set in a dark, dense forested area, Wood Man’s level reflects a pretty straightforward nature theme. It’s hard to tell if the ground is meant to be stone or wood — the pattern suggests wood, as do the multiple ascents and descents as if traveling through hollowed out trees — but, you know, whatever. The color palette helps set this stage apart while tying into the boss’ theme, a discipline that will increasingly become lost in this game’s sequels.

The opening portion of the stage greets you with slightly uneven ground and two types of enemies that attack from different directions. The purple rabbits hop toward you, pause, and fire off tiny missiles that look like carrots, because Dr. Wily may be a madman bent on world conquest but he also likes cute things and cartoonish themes. You face several bunnies in the intro area, and each poses slightly more threat than the last — the first appears on a path of ground slightly higher than where you’re running, putting its feet directly in the line of Mega Man’s arm cannon. You can stand and open fire and easily take it out before it can attack. The second is slightly below Mega Man, so its head is in your line of fire, and you can easily jump over its tiny rockets. And the third attacks you on even footing, causing its missiles to fly at a height that blocks your line of fire. It’s a small detail, but shows the level designers taking careful consideration of how to effectively evolve a single hazard by putting the environmental design to use.

Complicating the ultimately rather unthreatening rabbit mechs, you also have to deal with dozens of the Bubble Bats that hang from the trees and descend toward you. These have become an iconic enemy throughout the Mega Man series (including a memorable cameo in Mega Man X), because they’re cute! Just pretend its mouth is a beak and not misguided minstrel-style blackface…

Bubble Bats wrap themselves in their indestructible wings as they hang from the trees, only becoming vulnerable once they descend and flap toward Mega Man. Their behavior is similar to the endlessly spawning capsule guys in Heat Man’s stage, with the obvious difference that the bats don’t respawn. They also move a little more quickly.

But they do approach from above, like the capsules, and as there you really want the Metal Blade here. No coincidence, really; Metal Blade is one of Wood Man’s weaknesses. Once past the initial forest segment, you descend into a tree or cave or whatever and face these memorable foes: Giant dogs that block the way forward. The dogs emit arcing blasts of fire from their mouths, and while each of the three dogs occupies a differently configured room, the fire’s movement always passes through the spot at which Mega Man needs to stand in order to gun down his opponent.

In this first room, the fire’s simple enough to evade. It passes through the platform directly opposite the dog, but because of the large open space between that vantage point and the dog, you can jump forward easily to pass over the flames. The second and third chambers, however, give you progressively less room to maneuver. The final room has a jagged, uneven ceiling that greatly hampers your ability to dodge and limits where you can jump up and shoot at the enemy. In Mega Man 3, it would be easy enough to slide to safety, but the slide move doesn’t exist yet. So you have to play cautiously.

These impressive-looking mid-bosses clearly made a massive impression on fans, because cool-looking and largely stationary mid-stage foes would become a standard for the series. Beyond the dogs and back up the trunk, you come to a small clearing which visually reads as traversing the space between two large trees at the foliage level. In a nice touch, the platforms here appear to be made of bamboo, continuing the natural elements motif.

Here you have to deal with a threat from above, those egg-dropping birds that also appear in Air Man and Crash Man’s stages, while mechanical monkeys attack from below — they leap up to hang from the bamboo, then pounce onto the platforms once you draw near. Normally you’d want to handle the birds with the Leaf Shield, but of course you don’t have access to that until after you complete this stage and defeat Wood Man. Instead, you need to be more preemptive, destroying the birds (or at least their eggs) before they hit the ground and explode into a flock of babies.

Again, the Metal Blade makes the best choice for this scenario. The freedom to toss it at 45-degree angles allows you to take out the gorillas before they pull themselves up from below the bamboo planks while also making egg disposal much easier. Even if an egg hits the ground, the width of the Metal Blade combined with its piercing attribute ensure you can clear out most of the resulting baby birds with a single shot. The descent down the second tree brings the rabbit robots back into the picture in increasingly complex ways. The most interesting comes in the form of a full-screen stair step formation in which you discover that having the high ground isn’t always an advantage. It’s not too much trouble to toss Metal Blades down at the rabbit below, but without that weapon you’ll find it difficult to avoid taking damage from the carrot missiles it lobs your way (the Bubble Lead, ostensibly perfect for that situation, tends to be deflected harmlessly by the missiles).

The final leg of the stage introduces an interesting test of skill and reflexes: Giant chickens that run straight at you and leap. They soak up a ton of damage, making it difficult to shoot them down before they reach you. And you can’t jump over them, because they jump once they reach you.

Instead, the solution to making it safely past the chicken gauntlet is sublime in its counterintuitive simplicity: Rather than trying to shoot or evade the chickens, you simply stop moving before they reach you. They make their leaps shortly before reaching you, so all you have to do to avoid taking a hit is to stand motionless. They’re chickens, right? So… you play a game of chicken, and they’re the ones who’ll flinch. As for Wood Man, he’s kind of an annoying boss. He surrounds himself with the Leaf Shield, which deflects all attacks… well, all but one. After a few seconds, he sends the shield flying toward Mega Man. The projectile is easy enough to avoid by leaping, but the instant he looses the shield he also causes four leaves to begin drifting from the ceiling in a zig-zag pattern. It is possible to avoid taking a hit, but very very difficult. Difficult enough to border on feeling cheap, in fact.

On the plus side, Wood Man is weak to an unprecedented three Robot Master weapons. The Atomic Fire, when fully charged, will destroy him in two hits. The Metal Blade does a number on him, too. And finally, if you hit his raised shield with Crash Bomber, it’ll detonate against the shield and score multiple hits at once. So he’s easy enough if you have the proper weapons… but if not, he can be quite challenging.

Handily, his weaknesses are all intuitive; he’s a robot made of wood, so of course he’s weak to a cutting blade or fire. And the explosive splash of Crash Bomber reaching through his shield makes sense, too. Not necessarily the easiest battle to begin the game with, but strong on the whole.