At this point it behooves us to discuss some of the unique features that set Bionic Commando apart from other platformers of its vintage. Yes, it’s very neat that you can swing about with a grappling arm, but by no means was that the extent of Bionic Commando‘s deviations from run-and-jump standards. 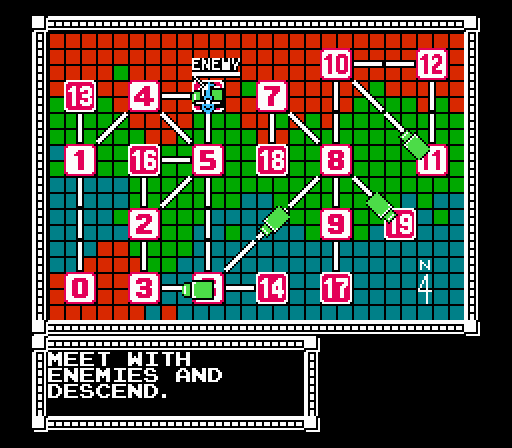 The map screen, for one. Not only does it allow you to travel freely around the game’s world, playing stages in almost any order (with invisible gates at the junctions between Areas 6 and 8 and Areas 8 and 10), it also has an almost RPG-like “random encounter” element to it as well. As you fly about from Area to Area via helicopter, groups of enemies roam the maps by truck. Should your copter intersect a truck, you’re forced to descend and fight your way through the blockade on foot.

This feature bears a remarkable resemblance to the roaming Koopas in the world map of Super Mario Bros. 3, though as it happens Bionic Commando actually predates SMB3 by three months. Which isn’t to suggest that Bionic Commando invented this idea, but to my knowledge it was the first NES game to make use of it. The truck sequences differ from the standard platform scenes in a very interesting way: They take the form of a top-down shooter. Capcom devotees will recognize these levels as a direct reference to Commando, from the overhead-but-behind-the-shoulder perspective to the tendency of bad guys to use grenades that they lob like Super Joe did in Commando.

“But of course,” you say. “Commando. Bionic Commando. Naturally, it’s a sequel.” And, sure, yeah, that makes sense. But this is something Capcom retconned into the game on NES. Super Joe starred in both Commando and the arcade Bionic Commando, but that didn’t signify much; Super Joe was originally intended to be a jack-of-all-trades character like Mario. He also starred in the racing action game The Speed Rumbler, which has doodly-squat to do with Commando.

Meanwhile, in Japan, Commando was called Senjou no Ookami (Wolf of the Battlefield) and Bionic Commando was called Top Secret. The NES Bionic Commando went by the name Top Secret: Hitler No Fukkatsu (The Revival of Hitler). I can only assume they decided to rename the arcade game to avoid confusion with the dumb Val Kilmer spy flick Top Secret!, and that carried through to the NES version as well. But interestingly, the Commando connection implemented in the localized title worked its way back into the actual substance of the NES game, despite the lack of an overt connection in the game’s name in Japan. And then Commando got an actual sequel (Mercs, aka Senjou no Ookami II) a couple of years later. This has little bearing on the gameplay, but it’s an interesting example of Capcom’s tendency to flail around with its sequels (see also Street Fighter ’89 and Street Fighter 2010 predating Street Fighter II). The top-down sequences allow you to carry only a weapon into combat; unlike Super Joe, though, Captain Spencer can’t chuck grenades. Instead, he still wields his bionic arm. Obviously, in a top-down sequence there’s little call for the ability to swing and climb, so pressing the bionic arm causes Spencer to spin around while extending his arm. This knocks away any foot soldier in range and deflects most bullets, so it can be a handy defensive maneuver in a pinch.

You encounter several different types of enemy in the top-down stages. Footsoldiers are obvious enough, while soldier behind cover can only be attacked when they stand up to take aim at you. Far more valuable are the “boss” enemies of the areas, which take multiple forms: Jeeps, command officers, even other bionic soldiers. These opponents wield heavier firepower and can soak up more damage, but the tradeoff is that if you can defeat them they’ll drop a Badd eagle emblem. Each emblem you collect is worth a continue. Normally, once you die three times, it’s game over. With an eagle emblem, however, you can choose to continue from where you left off. You can carry up to nine emblems at a time, and you can replace any that you use.

This is an interesting feature. When you first begin Bionic Commando, Captain Spencer can literally only take three hits and it’s Game Over. But as you collect experience via enemy drops (to level up your health pips) and eagle emblems (for continues), you can essentially battle indefinitely. Why they didn’t just build continues into the game by default we may never know, but in a way it positions Bionic Commando as a bridge between the old-school approach to action games in which you either couldn’t continue or had to hold a button combination to access a secret continue feature (as in Super Mario Bros., Wing of Madoola, etc.) and modern games, where the idea of a permanent game over is reserved for deliberately cruel indie games.

One big difference between the shooter zones in Bionic Commando and the entirety of Commando comes in their comparative lengths. Commando‘s stages stretched seemingly forever and contained numerous secrets, whereas these levels are brief and straightforward. You don’t even have to accomplish anything in particular, besides collecting emblems. In order to “beat” a truck encounter, you just have to reach the exit at the opposite end of the zone. There’s no reason to ever take more than about a minute to clear these stages.

In the most technical sense of the word, these sequences are not required to complete the game. Although a couple of hidden routes that you can unveil midway through the adventure feature mandatory top-down sequences, you can complete the game without ever passing through (or even uncovering) those routes. And aside from the eagle emblems, there’s no real reason to enter the shooter zones (save, again, for a key item you can collect in one of the hidden passages). In theory, you could avoid the trucks the entire game and never see the top-down portions of Bionic Commando.

But they’re worth playing. They provide an interesting connection to the game’s heritage — Commando — while pushing forward into the burgeoning reality of video games — infinite continues. And, most of all, it’s loads of fun to slap enemies around with the bionic arm.