I touched on the Neutral Areas in a previous update, but it’s worth looking more thoroughly into them. By and large, the Neutral Areas do precisely as advertised — they allow you to interact with enemy and unaffiliated characters non-violently, allowing the story to advance in small but useful ways. The Neutral Areas also throw occasional wrinkles at you, forcing you to deal with dangerous adversaries that pose a threat despite obeying the letter of the neutral law. Perhaps the most significant example of exposition through neutrality comes in Area 15, right at the beginning of the game. At the entrance you meet none other than the (remarkably tall) leader of the enemy forces, Generalissimo Killt. He insults you and marches along, but the real value here is to create some context for the plot and provide a callback at the game’s climax. You can’t avoid this encounter. Although you can skip many Neutral Areas, Area 15 is mandatory: Included in one of its chambers is an item you need to clear a subsequent level. This isn’t your first exposure to Killt; a rather younger and bluer version appeared in the attract mode. 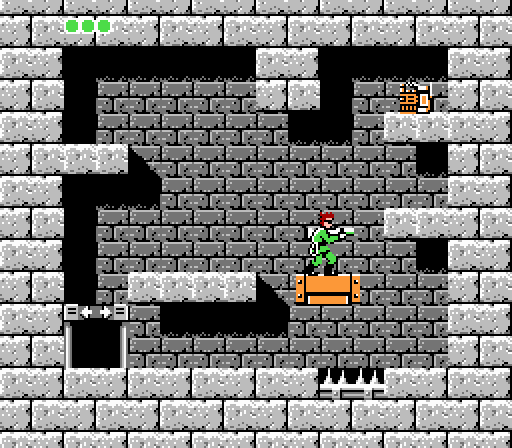 Once you get past Killt, though, you can collect this communicator, which is essential for clearing certain later levels. Communicators are equipped as the last item on the gear selection screen at the beginning of each level. It goes: Weapon, Armor, Support Item, and Communicator. There are four communicators, and each one works in several different areas, where it interfaces with that stage’s communications system. If you use the wrong communicator, you just get static (or rather, “GA• GA• GA•”, which I guess is Japanese for static). If you don’t possess the proper communicator for that area, you can’t unlock the boss door; though you only need to have found the communicator in question, not to have brought it into the stage with you. And knowing which communicator to use in a given area isn’t a crap shoot — denizens of various Neutral Areas will let you know the specifics if you seek them out. But the upshot is that you need to collect all the communicators in order to complete the game.

But here’s the thing about Bionic Commando: You don’t have to beat all the stages in order to complete the game. In fact, according to the Internet’s oldest dedicated Bionic Commando site, you only have to complete 10 of the game’s 18 areas — eight of which belong to the action stage category (of 12 total action areas), while two are Neutral Areas. Nearly half the game is superfluous, existing entirely for flavor.

Of course, the first time you play the game, you won’t necessarily know which stages are mandatory. Furthermore, because you can tackle stages in a non-linear fashion, you don’t even know the optimal route through the game. There’s a heavy element of discovery and exploration at play in Bionic Commando; as with the grappling mechanic, the non-sequential stage sequence encourages experimentation in subsequent playthroughs. Your first time through the adventure is quite like to be very different than follow-up playthroughs. 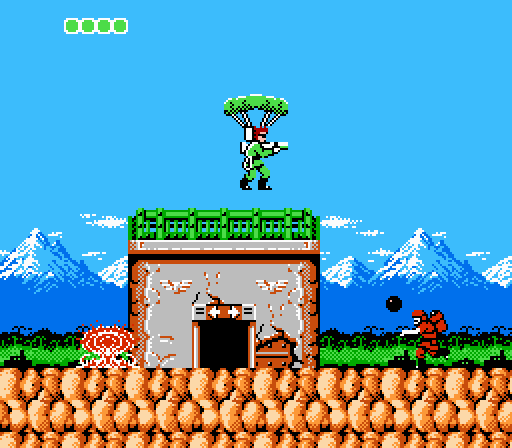 One such optional level is Area 2. Although Area 5 might seem the next map point to tackle, given its placement on the map layout, a newcomer will quickly discover Area 5 to be remarkably challenging. Area 2, on the other hand, doesn’t demand nearly so much from a player as Area 5 — though it does contain a new and unique mechanic. Specifically, Area 2 is full of goo. I guess this is meant to be industrial sludge that the pipes secrete, though the goo blobs seem to have a bit of a mind of their own. You just can’t help but anthropomorphize the little things. Probably because they’re a bright shade of blue.

The sludge blobs gush forth from the outlets located around the stage and shimmy in a given direction. If they hit a wall, they’ll reverse and slither along the ground in the other direction. Sludge blobs always seek the lowest point and will drip from a high ledge to a lower one.

For Captain Spencer, though, sludge globs have a powerful adhesive property that causes him to become swept up as they ooze past. You can’t run through a blob, as it will begin dragging you helplessly in its current direction.  Your only hope of escape is to pull yourself out with your bionic arm.

Your first encounter with the blobs offers you ample opportunity to break free before you’re dragged down into a drainage pit. There’s actually a pipe right next to the interior starting point of the stage, so you have to deal with the blobs right away. But the path it leads you along runs beneath multiple overhead platforms that you can grapple up to easily, and which will pull you clear of the sludge blobs. This leads you upward to the main portion of the stage — and while you’ll still have to deal with slime as you climb, there are many undulating platforms that slow the sludge’s progress and give you ample opportunity to ascend to safety. This leads you to the level’s other new threat: Dwarves in cranes. These vehicles can be destroyed fairly easily, though the chain pulley that descends and ascends resists all damage you throw their way; and if a crane drives overhead while you’re hanging from a platform, the chain will break your bionic arm’s grip and cause you to fall.

When you shoot a crane, the driver ejects to safety. Weirdly, Badd drivers are all very short. As a short person myself, that strikes me as the worst kind of editorializing. The back half of the stage is actually less dangerous than the opening portion; there are fewer slime outlets, and rather than pull you into an open pit they’ll instead try to drag you toward beds of spikes. Those are still hazardous, but they’re damaging rather than instantly fatal.

Ultimately, this level teaches you to rely even more on your bionic arm. You can’t jump or run to free yourself from the sludge trails, so you need to use your grappling skills to break loose. And grappling up to higher platforms and advancing by swinging along the ceiling rather than running often keeps you safely above the slime. Even though its location on the map might cause you to pass over it until later, Area 2 really does make a good follow-up to Area 1 (and 4, I suppose): Tricky but not too dangerous or overwhelming, and designed to impart important life lessons.