After Sector 2’s design, which left players much to their own devices to discover most of the area map, Sector 4 reels them back in a little bit. You’re given more explicit instructions and a detailed breakdown of the obstacles ahead of you; the challenge here is to circumnavigate those obstacles in order to reach your blocked-off goal. Adam reveals about 80-90% of the area map and goes on about the challenge here: The underwater area has suffered extensive damage, resulting in electrified pools of water that will injure Samus. Basically, the entire gimmick of Sector 4 is based around the alternate tactic for fighting Draygon in Super Metroid — except that instead of the electrified water serving as a secret alternate solution for beating a boss, it’s an unavoidable hazard that forces you to take an indirect route through the stage. 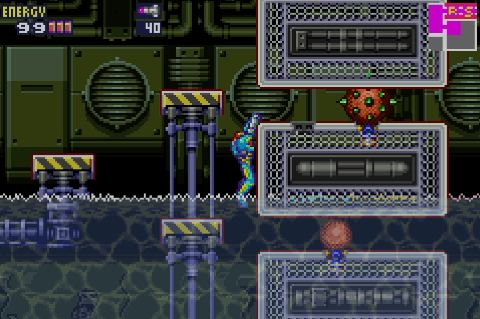 But here’s why Adam’s explanation is needless: The first room of Sector 4 to the right of the main entry chamber features an electrified current in a situation where you can’t reasonably die from falling into the water. What appears to be an open passage becomes blocked by that inflating pufferfish things when you roll into the gap, preventing you from advancing and forcing you to double back. It’s tough to hop out of the gap while in morph ball form, though, meaning you’re probably going to fall into the water and land on the platform just below the surface. The charged water will sap Samus’ health, but slowly, leaving you plenty of time to escape with your well-being intact, a lesson learned. The hazard posed by the water would be just as clear without the didactic text — an instance where less would be, if not more, then at least just as much.

In a nice little visual touch that doesn’t necessarily reflect reality but communicates the difference between safe and dangerous water, the surface of electrified pools consists of a jagged, shimmering line rather than the flat line of normal water. 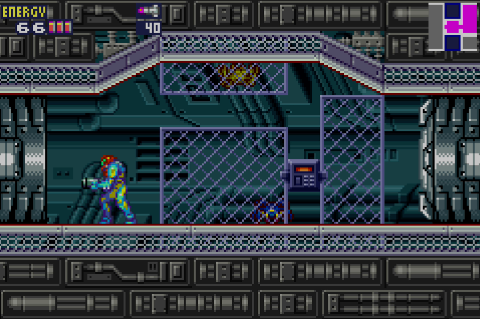 An easily overlooked detail in many rooms: You’ll frequently see creatures that haven’t yet been infested by X parasites hanging out in the background, safely out of Samus’s line of fire. Generally, though, you can expect to have to fight them in some form or another once you backtrack after completing a task; in this case, the creature on the ceiling transforms into a large, golden version of the Sciser crabs that occupy this region in such large numbers. As in Super Metroid, gold color denotes a giant pain in the butt: It can only be destroyed by missiles. 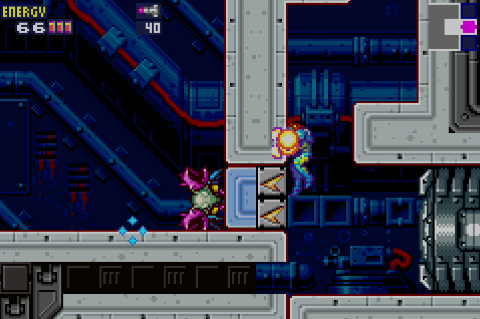 New to this area is a different kind of destructible block. One of the abilities the Bomb adds to Samus’ repertoire is the ability to reveal the nature of “hidden” blocks that can only be destroyed by specific powers or weapons. Destructible blocks are obvious through their coloration or other irregularities more often than not in Sector 4, begging you to poke and prod them. But this mysterious configuration resists all of your current abilities. Alas! Large expanses of electrified water span Sector 4, with suspended platforms providing your only purchase in several rooms. Even when you’re forced to drop from above onto these platforms, sight unseen, you can judge the placement of secure footing by the chains suspending the blocks. Since Metroid Fusion takes place entirely inside of confined, manmade spaces rather without any open sky (being set in a space station and all), it does demonstrate more of an effort to reconcile the placement of platforms with the logic of architecture. It’s no Castlevania, but it does the trick. While exploring, you can stumble across an alcove that offers the most convoluted platforming puzzle yet, rewarding you with two missile expansions for your troubles but also requiring a combination of tools in order to claim both prizes. It also requires a touch of intuition to detect this not-at-all-obvious missile block in the middle of the wall. Your hint: A completely useless and vestigial piece of ladder on the wall opposite. Also, if you wait long enough you can spot a creature patrolling inside the wall on the other side to clue you in to the fact that there’s a navigable space over there. This area really forces you to pay attention to the configuration of wall panels. There are a number of seeming dead ends that have to be bypassed by alternate means. In this case, the 2×2 panel in the ceiling to the right can be blasted away with Samus’s arm cannon, and the long block spanning most of the length of the top of the room will disintegrate when bombed, revealing an overhead ladder that Samus can use to cross the water below. If you take the direct and obvious route to the target room, you’ll encounter a broken floor that blocks your path. But you’ll also be rewarded with an Energy Tank. If you go the proper way, you’ll have to backtrack later to collect the tank. Peering around walls is all the rage in this sector, in fact. But this one gives you an unstated clue for the solution to your electrical issues: A pump control device, which can presumably lower the water level. At no point does Adam tell you about this; the only clue you’re given is the slow auto-scroll forward to reveal the device if you run to the wall, and the fact that the room is captioned “Pump Control Room” when you step inside. That’s all it takes, Metroid Fusion! We can do the math ourselves. A devious little puzzle here: This looks like a normal Save Room except for the dent in the wall to the right. Save Rooms have, until now, been a “neutral” space without threats or puzzles, so the presence of a destructible panel here might evade your notice unless you’re paying careful attention, either to the walls or to the minimap (which indicates an opening in the grid space for the room adjacent to the right). 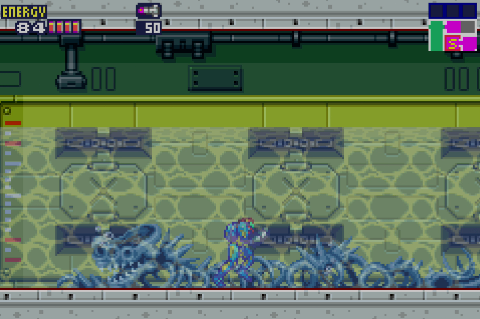 Whatever showdown was slated for this breeding tank with the aquatic dragon Serris clearly won’t be taking place. Though there will evidently be some sort of showdown. Behind the eye-door is a spacious room that appears to be the area’s primary pump system. Nothing seems to happen at first, but then the floor crumbles, leaving only a handful of segments. 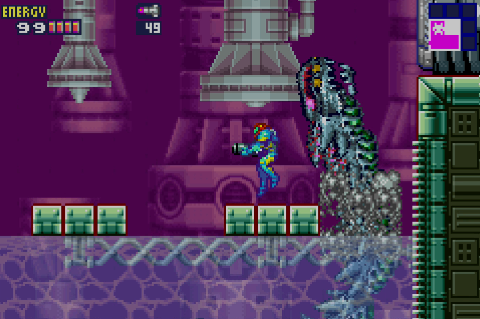 Serris, or at least the X parasite masquerading as such, bursts out of the water and travels in an unpredictable handful of patterns through the openings in the platforming: Performing large arcs overhead, dashing along the ceiling, performing tight sine-wave motions around the chunks of flooring. 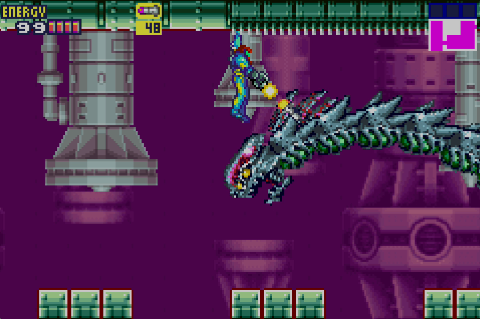 Serris-X is invulnerable along the length of its body, its head the only weak point. It moves at high speeds, which — combined with its unpredictable patterns — makes hitting the mark a difficult matter. Serris’s head need only be struck a handful of time to defeat the creature, but landing those blows can be tough… 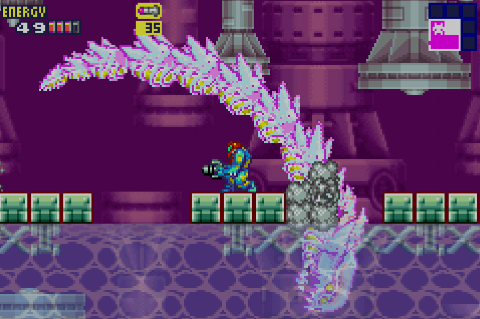 …and it’s made tougher by the fact that once it’s struck, Serris-X enters an invulnerable state in which it moves even more quickly than normal. All Samus can do during these phases is lay low and avoid being struck. As usual, there’s a Core-X here to be destroyed, with a power to be claimed.

If this area’s presentation was overly didactic, you have to admire the fake-out here. With this being a flooded region where Samus’s movement is heavily restricted by the density of water, you might expect this Core-X to yield the Gravity Suit power, or something similar. But no. That’s still a ways out, and Samus reclaims her Speed Booster ability. As usual, you need to put your new power to use in order to return to the main portion of the sector. This time, though, it’s not as simple a matter as just running and smashing a wall. This segment of floor can only be shattered with the Speed Booster, but it’s stuck in an alcove that prevents you from building up the momentum to reach a boost state. Instead, it forces you to break the wall immediately to your left, wipe out the creatures patrolling the interior space, and use the broken-open space for your run-up. The speed booster allows you to reach the pump control room, which is what you do to access the remainder of this sector. Who needs a gravity suit? The water level descends, leaving the exposed electrical conduits an active hazard but removing them from the water. Not only can you get about the region more easily now, no longer stifled by the weight of the water, it’s no longer dangerous (unless you incompetently blunder into the wires). Which isn’t to say you can just go wherever you like all willy-nilly; the dry environment simply reveals two new kinds of obstructions: A parasite membrane that can’t be destroyed with your current weapons loadout, and a switch on the wrong side of the security door it opens. Speaking of security doors, once you regroup and talk to Adam again, he explains your new mission objective and sets up a convoluted route in order to avoid opening any more of the station’s colored doors. And in case you’re too stupid to figure out how to use the elevator to reach the next area at this point, it’s helpfully explained again. Thanks, Adam.

4 thoughts on “The Anatomy of Metroid Fusion | 7 | Save Serris”