The journey to Sector 3 plays out differently from previous segments of the game so far. Each sector excursion until this point has sent Samus into an area to achieve a goal, then perform an unstated secondary task to unlock a new power. You don’t end up with a new ability after the surprise encounter here, however, as Secret 3 essentially works as a middle point between two other tasks.

As in your previous task, large areas of this sector remain inaccessible… …thanks either to excessive heat or areas flooded with magma (which combines fluid friction with excessive heat). You still won’t be picking up the heat-proof Varia in this sector; much as in Super Metroid, the overheated portions of the game function as a sort of dangling carrot to entice you for a while. All these spaces you can’t yet enter are meant to stick in your memory for later reference, taunting you with their unavailable nature. 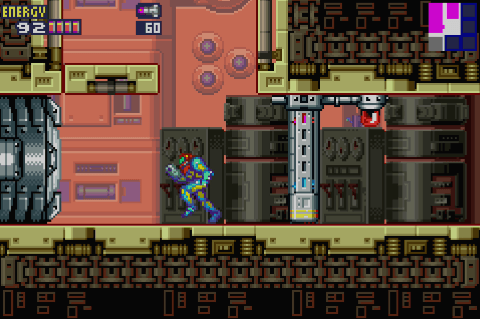 Instead, you need to figure out how you can advance. The passage to the right of the sector’s first large room has been locked down with another of those emergency one-way gates, making it impassable. Well, seemingly impassable, anyway. 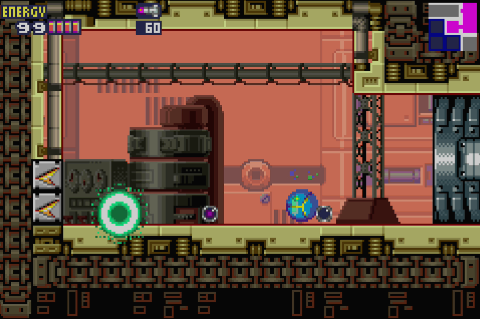 Opposite the security door you’ll find another seeming dead end, though a quick application of your bombs to the left wall will reveal speed booster icons. The tasks in Fusion are growing more convoluted now, as you’re forced to combine your two most recent skill upgrades in order to clear the path forward: Bombs to reveal, speed booster to clear. Even trickier: Speed boost through the wall and the area you reveal terminates at a green security door, which is precisely what you’ve come to this sector to unlock. The switch to unlock the green doors is hidden behind a green door, making for a gordian knot of safety. Like downloading a decompression app only to find it’s in .zip format.

The solution, then, is to sneak into the security room through the conduit in the ceiling. You can see the opening in the ceiling overhead leading to the door, though you can’t shoot or bomb your way into it. Instead, you have to break through with another speed boost, this time through blocks suspended above the floor — meaning you need to jump while boosting. Conveniently, the floor is sloped in just such a way that it draws your eye to the vulnerable point and creates a sort of ramp to leap from. Thank goodness for this space station’s completely insane architects. Once again, it’s fortunate that the security doors were designed to be unlocked only by Samus Aran. 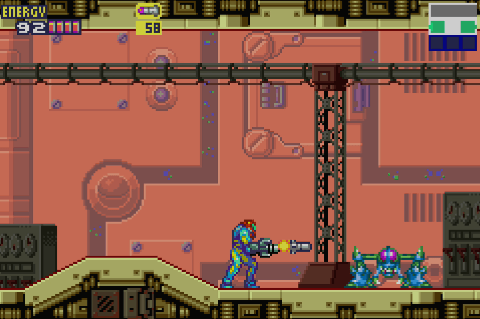 Opening the green doors causes X parasites to invade this portion of the station (Sector 3 has been monster-free until now). This does more than simply add a combat rhythm to the action, though. The arrival of parasites also gives you a valuable hint for moving forward. 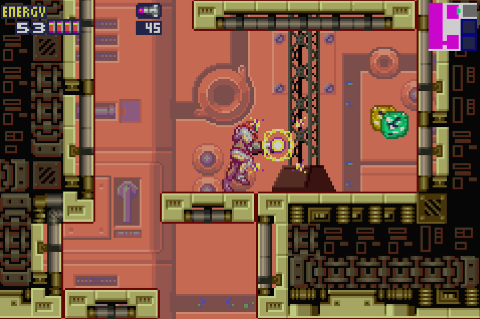 See, even with the green doors unlocked, there’s still not much of anywhere new to go in Sector 3. But back to to the right, above the security gate, those weird barfing alien faces that grew out of the wall in Super Metroid take up residence here once the X are allowed in. The bottom-most face sits immediately above the gate, and when you destroy it the loose parasites that emerge don’t do their usual flying-around-the-room thing. Instead, they simply sit in place, enticing you to run forward to collect them and top off your health… which you’ll probably want to do, as the wall-bound face creatures now have the ability to dart forward to hit Samus at a distance, a fact that will almost certainly catch players by surprise the first time. When you grab the free parasites, the floor suddenly collapses beneath you, revealing the fact that you could have gotten to the other side of the security gate at any time. It’s a clever little touch — you could have bypassed the gate as soon as you arrived in Sector 3, though there was really no purpose to it as the green doors beyond here would have halted your progress. But now that you need to advance, the map designers lure you in with a subtle twist on standard play mechanics. X parasites demonstrate a variety of behaviors when loosed from their hosts, so the fact that these particular parasites hover motionless instead of flying around doesn’t stand out as odd until you’ve fallen through the floor. Like a damn fiddle! The data room beyond Sector 3’s security doors grants you a missile upgrade. These work somewhat differently than the Super Missiles in Super Metroid. Rather than being a more limited alternate fire mode to standard missiles, these Super Missiles actually replace the previous projectile altogether. In other words, it’s a linear and permanent power upgrade.

This appears to be a concession to Game Boy Advance’s more limited interface; with only two face buttons to work with instead of four, Metroid Fusion streamlines its controls so that holding down the R trigger activates your alternate fire mode for all weapon types. You no longer need to cycle through your weapons this way, so everything feels more immediate and responsive. On the other hand, you do lose out on the tactical aspects of Super Metroid‘s Super Missiles: They were more scarce, but far more powerful, and had interesting secondary effects in certain places (e.g. triggering Phantoon’s alternate attacks, knocking hidden enemies loose). So, a tradeoff. Basically, Super Missiles hit somewhat harder than the old model, and you can take out these blue barrier membranes… of which you’ve encounter maybe two. So it’s not really that big a deal. 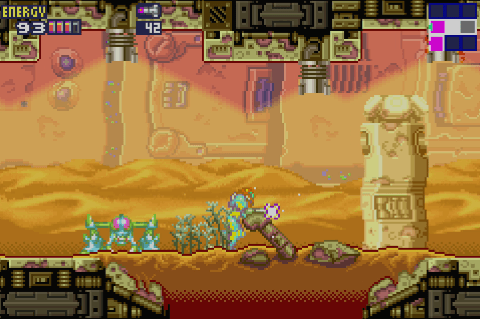 I’m not sure if the room leading to the data chamber was a deliberate reference to Super Metroid, but this arid region patrolled by Sidehoppers seems like a callback to the super metroid’s feeding pen at the end of the previous game. 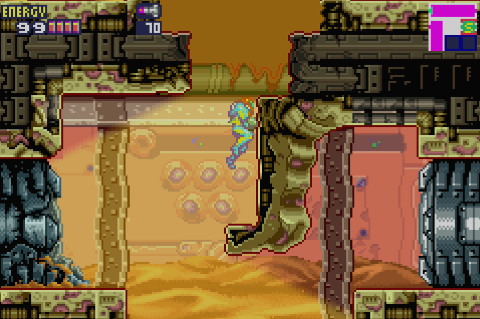 And here, as there, something dangerous is afoot: Once you pass this room and download Super Missiles, the screen is rocked by a loud explosion, and you return to find the floor torn open and one of the doors destroyed. It’s not SA-X, though — just a fake out. Instead, a berserk security droid goes on the attack, shattering another door as it crashes out of the data room you’ve just activated. Samus is penned in this area, so there’s no flight. Just fight. 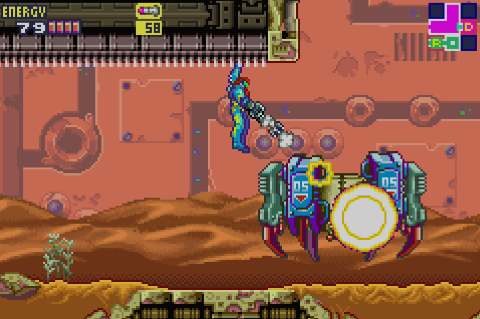 The droid is only vulnerable from above and scuttles back and forth rapidly, meaning you need to attack by hanging from the overhead rails and firing downward in the brief windows that its exposed central area comes within range. Its spider-like legs frequently compress inward, lowering the vulnerable central core unit to safety, but the droid needs to widen its stance in order to attack or move. Its attacks consists of columns of fire that travel away from its body on either side, rising high enough to hit Samus even when she’s at the ceiling (and moving quickly enough that you can’t simply move away from it with the overhand crawl). It’s not a particularly difficult fight, though, and the droid escapes by launching itself upward through the ceiling once it’s taken enough damage. Handily, this dislodges huge chunks of structure, which create a convenient new platform for Samus to use to chase after it. You can’t catch it at this point, though. Although it seems there should be more to do here in this sector, the path the droid creates leads you back to the entrance of the Sector where you learn two new areas have become available thanks to the diminished security restrictions. But of course you’re only allowed in one of those zones for the moment, since Sector 5 is effectively inaccessible due to its cold temperatures — plot and mechanics dictating game flow. Adam warns of a new hazard that’s entered the scene: Frozen X parasites that have evolved to hit Samus in her newfound weak point. 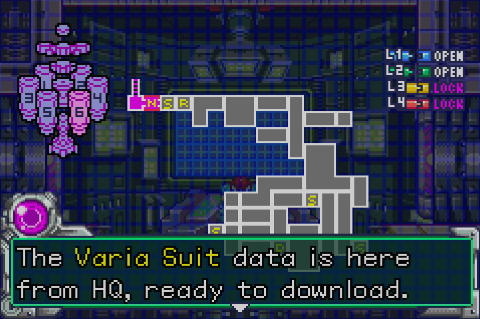 But thankfully, the Varia will finally become available, protecting you from heat and cold. This all sounds interesting in terms of game mechanics, but it’s disappointing that Fusion once again robs you of the discovery process, spoiling the surprises in store for you with a mission briefing. There’s no reason players couldn’t figure out the hazards of Sector 5’s climate through experience, just like we quickly realized that wading in magma was a bad idea. And the danger of blue X parasites would have been wholly self-evident as well, with the unannounced acquisition of the protective Varia suit resulting in a welcome sense of relief.

The didactic computer tutorials made sense at the game’s outset, but at this point they feel somewhat grating… and degrading. Players have gotten a taste of liberty as they venture beyond Adam’s watchful eye, so the game’s continued insistence on laying out every detail feels like a step backward. Though even that’s no big deal next to the shadowy plot exposition that follow’s Samus’ departure from Sector 3. Come on, guys.