There’s a lot of ground to cover in stage one of Super Castlevania IV—literally. This opening level sprawls even further, and introduces more game mechanics, than even the massive first stage of Castlevania III. Many of the tricks and lessons it teaches cover the same ground as the previous game, as we’ll see here in the final block, which transpires across a surprisingly enormous stable. 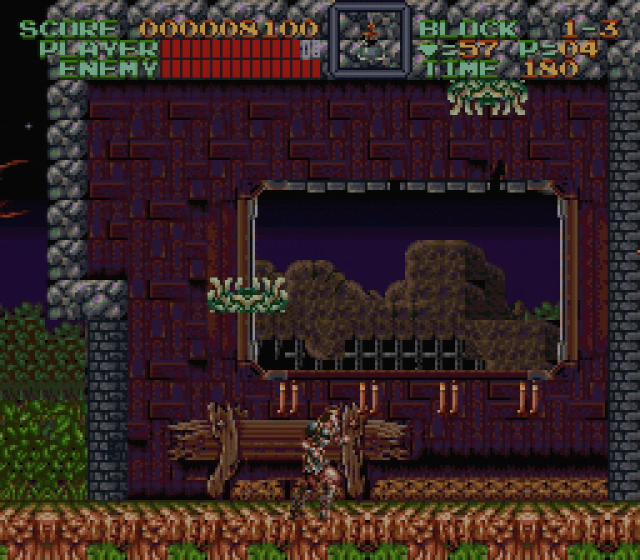 A very scenic stable at that—check out the incredible picture windows in the background. Dracula’s horses didn’t want for a glimpse of the great outdoors.

You might become so caught up in admiring the scenery here that you overlook the threat that appears immediately after reaching Block 1-3, though: Viper swarms that cling to the ceiling and drop down to the ground as you pass beneath them. We’ll see falling objects that work this way throughout the game, but viper swarms work a little differently from the usual acid drops and stalactites of video games. Once they hit the ground, they don’t explode or cease to become a threat. Instead, the creep slowly toward Simon, still entangled.

Because they’re placed at the very top of the screen in this first encounter, they take long enough to hit the ground that you have time to walk past them safely before turning and whipping them. Of course, Simon can also whip upward, so you could just stand beneath the vipers and smack them out of the air. If you advance at your usual pace, you’ll trigger the trap without putting yourself at risk, making this a decent introduction. The holy water subweapon comes in handy against the viper nests, since they’re so low to the ground, but this is more of a convenience than a necessity… which basically describes subweapons in Castlevania IV in a nutshell.

The holy water also comes in handy against the horses that live in these stables, which aren’t your typical equines; taking a cue from The Godfather, perhaps, these are decapitated horse head specters which lie in wait for Simon and begin flying toward him as he approaches. The first couple lurk on the ground and fly low, putting them exactly within range of the holy water’s flame. Further, uh, ahead, you’ll find one of these phantasms clinging to the ceiling. It’s also easily dispatched with other means… 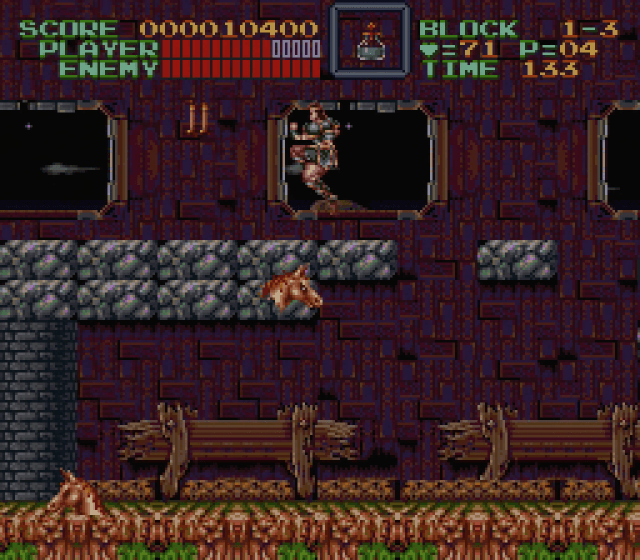 …but it respawns once you pass, climb the stairs to the upper level, and double back. The design and placement of the horse specter relative to the stairs seems carefully calculated to take you far enough from the ghost’s resting point that it causes the enemy to reappear as you retrace your footsteps on the upper level. This seems like a fairly innocuous way to introduce the idea that enemies can return if you backtrack, while at the same time forcing you to interact with an enemy you’ve already destroyed in a new way (since this time it approaches you from below rather than above). It also demonstrates the effective range at which this enemy will be activated by Simon’s presence, as the upper path is situated high enough that the horse heads on the ground don’t come to life as you pass overhead. And now the chunk of game basically lifted straight from Castlevania III: A series of floor sections that flip upside down and drop you off the screen if you jump onto those thin sections. You’re OK to walk over the spinning platforms, as they’ll bear Simon’s weight. They only flip if you land on them. The trick, of course, is not to jump in this section, but the introduction of a new enemy type can make it difficult to stick to the ground: Medusa heads. As in previous games, Medusa heads fly in an undulating sine wave, similar to bats but much faster and at a much higher “frequency” between their high and low points. With less visible space between Simon and the edge of the screen, you have less time to spot and react to Medusa heads here than in previous games. If one slips through your guard and strikes you, there’s a good chance the knockback effect Simon suffers upon taking damage will cause him to land on an unstable section of floor and fall to his death.

In Castlevania III, the first few flip-floor sections appeared on an upper tier of the screen with safe ground below as a sort of safety net as you learned their mechanics. You’re extended no such courtesy here, though I don’t know whether that’s because the designers figured you’d be a seasoned and experienced player or simply because the overall game is so much easier than the 8-bit chapters and it needs to bare its fangs somewhere. Beyond the Medusa onslaught, you achieve a hat trick of decapitation as a ghost materializes; unlike their 8-bit counterparts, these ghosts much more clearly depict a severed head with a few dangling vertebrae. Between the horses, the Medusas, and the ghosts, it seems beheading was all the rage in Transylvania.

Also note the viper swarm sneakily tucked in the little nook in the ceiling above the lower path. While the thing is sitting in plain sight, you could potentially overlook it after having recalibrated your expectations to deal with more active hazards. If you walk blithely beneath it once you double back to the lower level, it could potentially knock you off the edge of the stairs. The sneaky viper swarm does serve to remind you of that hazard’s existence, so you’ll be more alert for the next one to appear, clinging to the bottom of a suspended platform. If you don’t take this one out in advance, it will definitely knock you back onto a spinning platform and into a hole. One final surprise as the level reaches the end: Health-restoring meat hidden in a candle. I don’t think the NES games ever tucked healing items into candles, only walls, so this is a bit of a novelty. A screen ahead, the scrolling locks into place as the boss emerges. In keeping with the stable theme of this section, Rowdain appears as a skeleton riding horseback (on a horse skeleton) and armed with a lance. He’s a pretty aimless boss; he shuffles back and forth while his horse spits fireballs at Simon, but Rowdain himself surprisingly doesn’t attempt to use his lance. While fittingly easy for a first boss, it does seem a little disappointing that he doesn’t act more like Zelda II’s Rebonack and attempt to run you down. The lance only comes into play once you whittled half his health down, at which point the horse skeleton explodes and Rowdain takes to his feet. He leaps around the room, attempting to reach the peak of his jump arc directly over Simon’s head, at which point he plunges lance-first toward the hero. This, too, is easily avoided. In a neat touch, once you knock Rowdain’s health down to a single block, he fakes his death: He explodes into a shower of bones, just like the normal skeleton foes you fought at the beginning of the stage… but this is merely a feint. His component parts hover into the air for a moment, then reassemble into the boss, who takes a big swing at you while appearing to laugh. 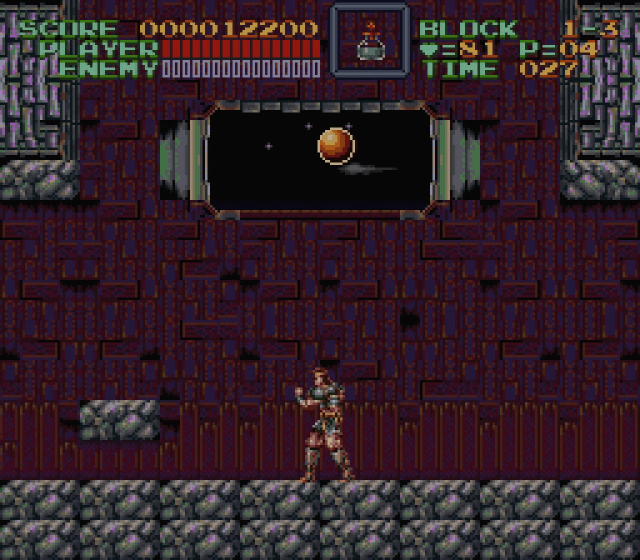 The creativity of this gimmick is only slightly undermined by the fact that Rowdain is an embarrassingly easy boss. But that’s kind of Castlevania IV in a nutshell: Not especially difficult, yet nevertheless packed with wonderful details. As usual, a crystal appears at the end of the stage, refilling Simon’s health and giving a bonus for whatever time remains on the clock. From here we see a full map of the game; the stables are the small building next to the larger ruins in the lower-left of the map. With each stage, the map zooms in to draw a line through the path ahead—in this case, up a cliff and down a spillway. You may notice that, unlike in earlier games, the icon depicting the boss of the stage doesn’t necessarily appear at the end of the stage. That’s because Castlevania IV doesn’t always put bosses in the expected places, as we’ll see, part of the Castlevania IV experience is soldiering on beyond an encounter without a proper refueling from a boss crystal.