Having spent the past few months exploring one of the most intricately crafted video games of all time, I figured it might be nice to have a break from the serious stuff and look at something much less substantial. So let’s explore Konami’s The Goonies (for the Japanese Famicom) and its sequel (which came to the U.S. on NES).

Actually, The Goonies wasn’t technically limited to Famicom; it also saw limited release in the U.S. via the PlayChoice 10 arcade system. But it never saw a retail release here, meaning that in order to enjoy it, you need to import it or buy the PlayChoice 10 ROM. I’ve done both in my time, but since I never bothered to buy a PlayChoice 10 machine, let’s work off the cart, shall we?

Despite being a mid-’80s arcade-style action game based on a kids’ movie, The Goonies exhibits better design tendencies than you might expect. Blame Konami, I suppose. They always made such nice games in the 8-bit days. The Goonies hails from right around the same time as Castlevania‘s original release, and while it certainly doesn’t hold a candle to that classic, neither is it too shabby. And it forms an essential pairing with The Goonies II, which doesn’t so much build on its foundation as simply turn The Goonies into the fleshed-out adventure you suspect its designers really wanted it to be in the first place. What we have here is basically your classic 2D 8-bit microcomputer platformer. That is to say, it doesn’t unfold as a strictly linear sidescroller in the typical arcade/NES mold, a la Super Mario Bros. or Adventure Island. Neither does it take on an entirely free-roaming style like Metroid. It exists somewhere in between, not unlike the MSX version of Castlevania and countless other PC action games of the day. It mixes twitch reflex with the need to be more observant and take in your surroundings. You run, jump, and attack as in an arcade game. You can collect temporary power-ups, too. But there’s a greater element of permanence in The Goonies, with certain power-ups becoming a fixed element of protagonist Mikey’s repertoire… should you be able to find them. And, like a lot of games of its era, a big part of the experience involves poking around in random areas to uncover hidden items. There’s as much of Milon’s Secret Castle or even Tower of Druaga about this game as there is Super Mario Bros.

The opening screen of the game communicates practically everything you need to know about how to play. Mikey begins at the left side of the screen on the top floor of a building consisting of two floors and a basement, which you can explore via climbing and jumping. He begins in front of a safe that he can’t open; two floors below him you’ll see a locked door. Monsters (well, mice) materialize to his right and below, occupying the same screen but isolated out to separate spaces. You’re safe in your starting spot, but once you move you have to deal with monsters.

Your goal here is clearly to open the door at the bottom and descend the ladder that enticingly leads to another space. In order to do that, you need to collect items (three keys and a captive Goonie) from the safes. And in order to make that happen, you have to kick mice, who drop bombs upon their demise. Once you grab a bomb – you can only carry one at a time – you drop it in front of a safe and wait for it to explode, at which point it will reveal the contents. In this first stage, that’s always either a key or one of Mikey’s fellow Goonies, both of which you have to collect in order to advance to another stage.

So this first screen contains everything you need to know about The Goonies. You need to explore more of the stage – the viewpoint scrolls for several screens over to the right – in order to collect all the stuff you need to advance to level two, but all the game’s core elements exist here in this single space. You’ll even find the first secret here: Kick (or duck, or press up, depending on the stage) in certain places and hidden objects will appear in midair. Usually you’ll just find diamonds, which you can collect to gain a health refill, but occasionally you’ll find key items as well. 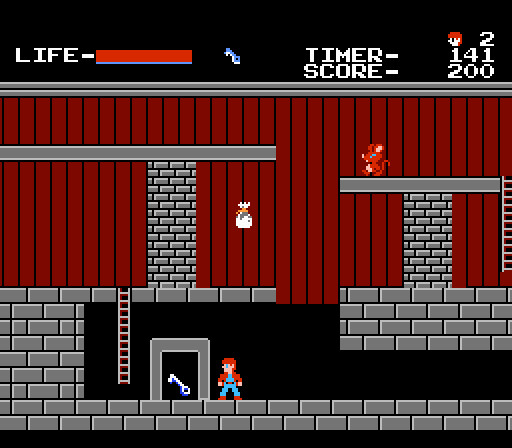 Key items appear in bags and, unlike other items, become permanent additions to Mikey’s inventory. They confer huge advantages to him, everything from granting invulnerability to certain hazards to enabling a massive shortcut through the game. Again, it’s very similar to Tower of Druaga – and, as in that game, if you miss an item, you miss it forever. These bonus goods are much less essential than those in Tower of Druaga, though, so skipping over them won’t totally spoil your chances of survival.

The first key item in the game is situated directly below Mikey’s starting point in such a way that if you immediately drop down and double back to attack the first mouse that appears as soon as you start the game, you’ll be at the perfect spot to reveal the item when you kick the mouse. And the mouse will respawn a few seconds later at the exact spot where a diamond is hidden, so by attacking it once it rematerializes you’ll uncover that secret as well. This is about as close as The Goonies comes to handing you a secret on a silver platter, and while you may miss these items your first time around, you’ll inevitably discover these early secrets when you replay the game… and once you’re clued in here, you’ll know to look for similar secrets throughout the game. This first stage is thick with secrets, so the chances of you not accidentally uncovering at least a diamond in the course of normal play are pretty slim.

The first item you’ll likely collect is the headphones, which protect you from one of the Fratelli brothers’ musical attacks. Remember how one of the brothers in the film liked to sing opera? Well, they’ve weaponized that. The headphones protect you. The second, which appears in the alcove above, is the flame suit, which protects you from the jets of flame that appear in stage two. Again, you can finish the game without it, but having this added layer of protection makes the game much, much easier. This first stage consists of about four screens’ width, and it gives you ample time to find your objectives and return to the door in the basement. Thematically, The Goonies does a surprisingly good job of recreating the themes and goals of the film, though obviously it takes its share of 8-bit liberties. Bad enough you’re karate-kicking giant mice, but when you kick the orange ones they reveal themselves to be foxes. Because, you know, kitsune run rampant through the streets of Astoria, Oregon.

Occasionally you’ll find a white rat that drops a cross when you collect it, granting Mikey temporary invulnerability. I guess the Fratellis did make some remarks that pegged them as Catholic, so…. why not. Speaking of the Fratellis, the brothers chase Mikey throughout the game. Unlike the other enemies you have to deal with, the brothers can’t be defeated, only stunned. When you kick one of them, he’ll fall over and twitch for a few seconds before picking himself up and continuing the pursuit of their young quarry. Taking a Fratelli out of the action for a moment isn’t functionally too different from defeating a rat or whatever, since they respawn at about the same rate as a Fratelli recovers; the main difference is that minor enemies respawn a short distance from Mikey, whereas a Fratelli just pops back up without notice exactly where he fell. A downed brother will twitch for a few seconds, then stop briefly as a small visual warning he’s about to leap back up and resume the chase.

Fratellis also make for much more aggressive foes than the puny little mice do. They actively pursue Mikey, pausing to look around to find him, climbing ladders and hopping to lower levels in order to find him. They seem to possess something akin to a functional line of sight, and if they don’t actually see Mikey they’ll continue moving slowly in search of him. Once they spot him, they move directly toward him and begin attacking, either firing pistols or unleashing deadly arias. While they move slowly and attack infrequently enough not to pose a dire threat to Mikey, their persistence goads the player forward. To advance to the next stage, you simply need to crack open the vaults and collect the keys (and child) inside, then walk up to the door below the Fratelli hideout’s front porch. That’s so much easier than dousing a fireplace with a water cooler bottle.